Hearing about the vandalism that occurred to Dog on the Tuckerbox overnight, both makes me angry to the bones and glad that we got to see it on our trip. (If you haven’t heard what happened, click here to find out). In light of this disgusting act, I wanted to share our trip to the Tuckerbox for those who have missed out and to also draw attention to what the Dog on the Tuckerbox was (or, maybe, is- if it will be restored!).

The Dog on the Tuckerbox was a beautiful piece of heritage located just five kilometres from Gundagai. Apart from the strong history associated with this place, as commemorated by the statue, it’s a great place to stop for a rest break with toilets, take out, and a gift store attached. 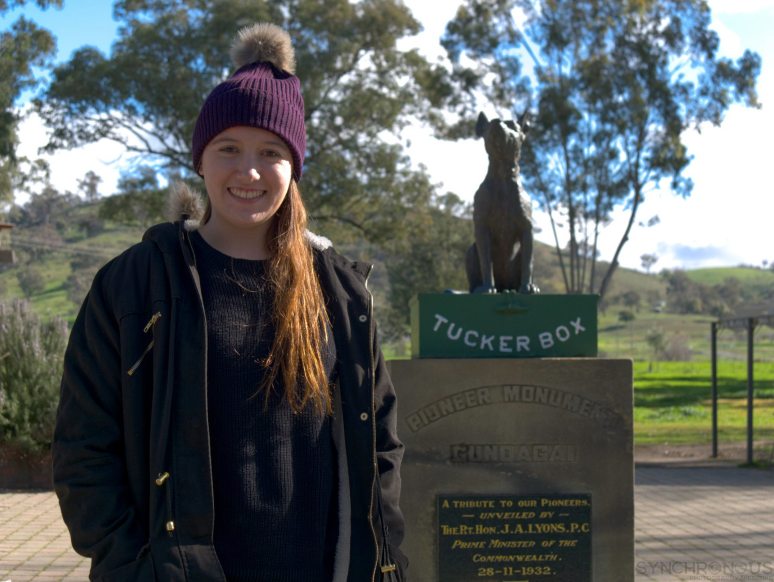 According to a sign near the statue, the Dog on the Tuckerbox was supposedly erected to memorialise “an incident that occurred to a teamster named Bill the Bullocky on the road to Gundagai in the 1850s”. After his wagon became bogged in a creek and one of the bullocks broke while he tried to drag the wagon out of the bog, Bill gave up and decided to have some lunch. It was in this moment he saw his dog sitting “-or worse-” on his tuckerbox. Apparently, all the other bullockies thought this was hilarious with one bullocky supposedly even writing a poem about the incident.

After reading this sign and taking a few touristy photos with the statue, we went inside for a meal. Luke ordered a burger. Unfortunately, it was overpriced, the order came out wrong, AND it had super basic ingredients. I had a milkshake that I also thought was quite overpriced. However, the take out is in a convenient location and, paired with the toilets, a great place to stop, as aforementioned.

We also thought the gift shop in general was overpriced; but it did have some lovely memorabilia that was unique to Gundagai. I bought a 3D postcard that I still think is the coolest postcard I have ever seen!

Hopefully the Dog on the Tuckerbox will be restored and the culprits caught. We loved this historical treasure, the story behind it, and appreciated the chance to stretch our legs.

Looking for other activities near Gundagai? View Day 2 of my itinerary here for ideas!